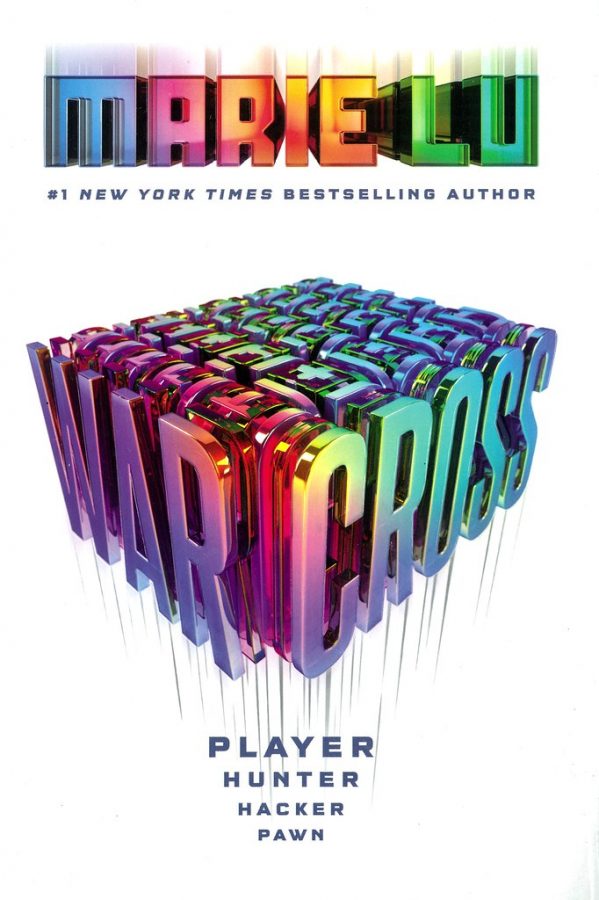 When I first picked up Warcross by Marie Lu from my school library I only did it because it was one of the fresh new books that seemed like it hadn’t been touched yet, and the rainbow letters on the cover caught my attention. I didn’t know I would end up flipping through all the pages in just a couple days. Warcross is the name of the most popular virtual reality game in the book. It’s a competitive battle game but also just a place to escape to a virtual world full of possibilities and even make money from it. This book follows the story of 18 year old Emika Chen, a bounty hunter that goes after criminals and their illegal doings in Warcross. As the book begins, Emika looks for a quick way to avoid being evicted from her apartment. Out of desperation, she tries to hack into Warcross to get some money, but glitches into the middle of the Warcross championship with the whole world watching. She unexpectedly ends up getting a job offer for her hacking skills from the creator of the game, someone she had always looked up to, Hideo Tanaka. The mission is to be a spy and go after another hacker who is a security threat to the game, with which she will be rewarded a huge amount of cash, which she accepts. She finds herself in Tokyo, playing in the Warcross championships herself, making friends with some of the top players in the world, and even starting a romantic relationship with Hideo. Through this mission, she uncovers the mysteries of the hacker she is after and the true motives Hideo has with the game he invented, and the consequences it could have on people’s lives in the real world which has her dealing with technology and ethics. In the book, people use VR glasses or contact lenses to connect to the game, and that technology is able to tap into someone’s brain. Technology can be used to improve the world and make it a better place, but it shouldn’t be something that takes away a person’s freedom and controls their decisions. This book was action packed and full of excitement for me, and the way it was written really felt like I was playing a movie in my head. I think the author did a good job with the plot twists as it made the book more compelling and hard to put down. Some might say that they didn’t buy the romance between Emika and Hideo, which I can understand why, but I think it was interesting the obstacles he presented to Emika and how that played into how the plot unfolded. It made me look forward to the second book, Wildcard, also containing crazy plot twists and Emika figuring out how to save people’s lives from being trapped by an algorithm meant for a virtual reality game. If you’re looking for a thrilling science fiction book to read this summer, I suggest checking out Warcross.