Danehy Park has a strange but often overlooked history. During the sites history it has been the grounds of the New England Brick Company, a landfill, and now a beloved park. Recently the city has been working on turning a vacant lot just outside of Danehy park into a playground. It is being built right next to Danehy Park, and is expected to be finished by November of 2021.

The idea of a universal design playground is to include features accessible to those in wheelchairs, or who have other such disabilities . One aspect is different elevations in an attempt to prevent some from becoming overstimulated. Signage in braille will be along with clear directions for where the wheelchair-bound can access.  As noble as these efforts are, some people wonder what the point is of building a playground so close to Danehy park, instead of renovating another playground or building a new one there. 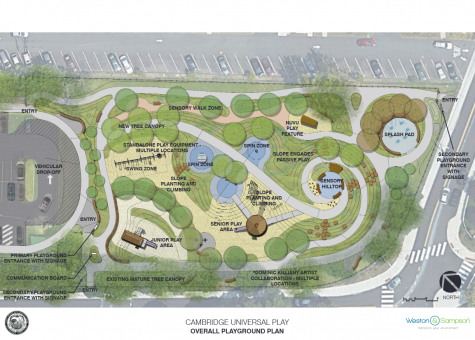 Wondering if others in the area were questioning weather or not the playground was worth it, I talked to a resident of the buildings adjacent to the current construction. Here’s what he had to say:

Q: Have you lived through lots of construction projects?

Q: Would you rather that something besides a children’s playground is put here?

A: I think it’s a good idea, there are lots of kids around here anyway.

Q: Do you think that this is a good use of this land?

A: Honestly it could have stayed the way it was, we live right at Danehy park, there are already plenty around here.

Q:Does the construction ever get tiring or too loud?

A: No, maybe once a month or so it’ll get pretty loud with a jackhammer or something, but it’s mostly pretty quiet.

Q: Is there anything, construction related or otherwise, that you would rather the city put effort into?

A: No, to be honest things are fine for me at a citywide level.